Hello and welcome to our second dev update post!

Today we wanted to take a deeper dive into the design process of our protagonist, The Arbiter, and give you a bit of a peek behind the curtain at the character design process.

Two of the artists involved in The Arbiter’s creation, Jamie and Naiha, were gracious enough to sit down and shed some light on how The Arbiter we see today came to be.

Who is The Arbiter?

JAMIE: She is our main female protagonist operative in Foregone. She was a part of a group of super-soldiers who have been given the title of Arbiter. The best of the best. Highly skilled, fearless, dangerous, often feared for their combat prowess during the war of Calagan. That’s where all this takes place. When the war ended, they were relegated to a law enforcement role. Did I forget to mention…she kicks ass!?

What was the process for creating the look of the Arbiter?

JAMIE: When we first began development and design production, there was little restriction on who or what the Arbiter is. The first details requested by design was that the Arbiter be female and that she was an elite badass! We had a small team of artists go nuts with concepts. 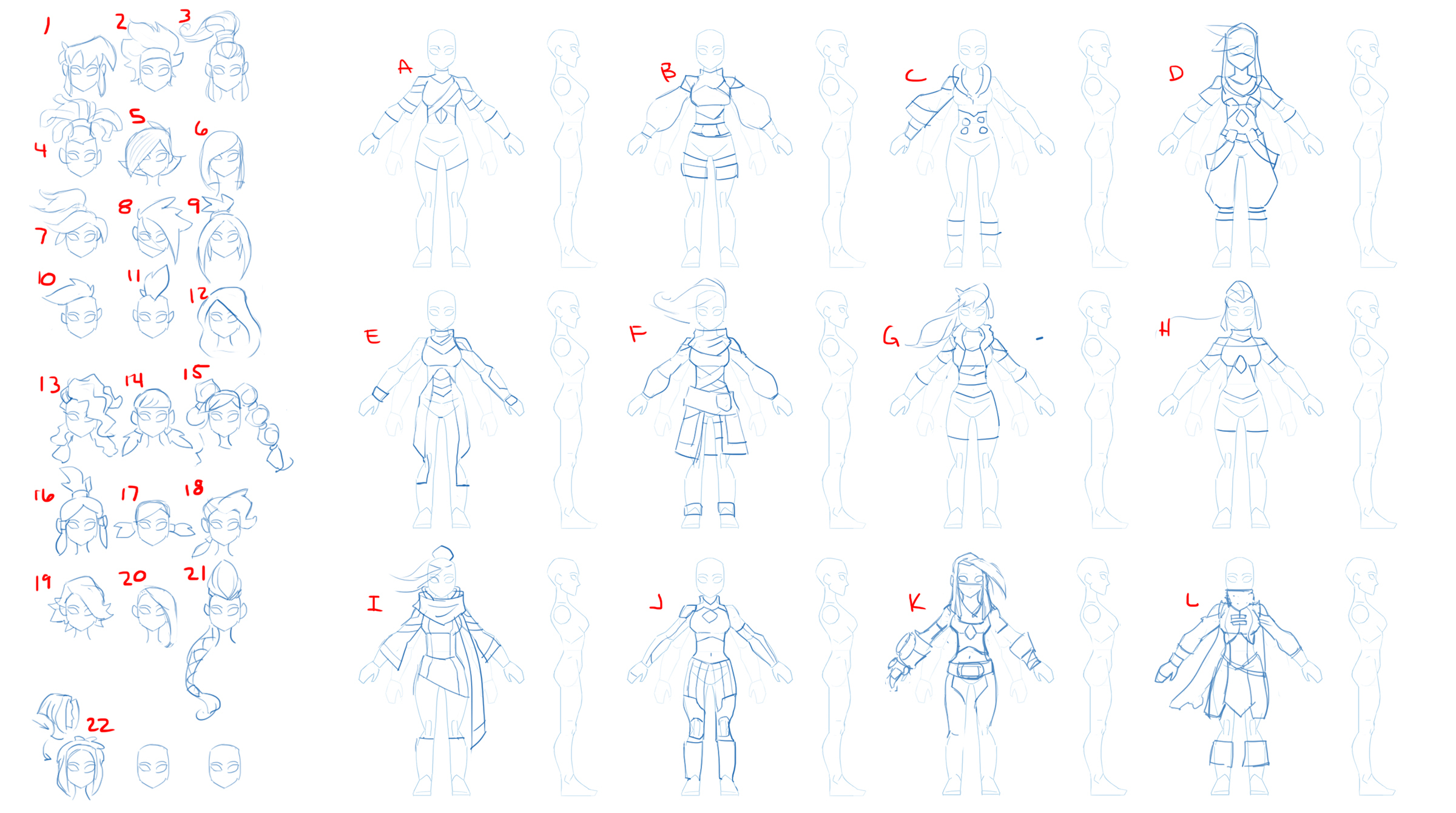 NAIHA: The process was a long one with a lot of considerations. We started with silhouettes and shapes to see what would stand out and look good. Next was adding details here we have to consider the pixel nature of the game and make sure things read well at that scale. That is where we had to pick and choose and see what made her look great. 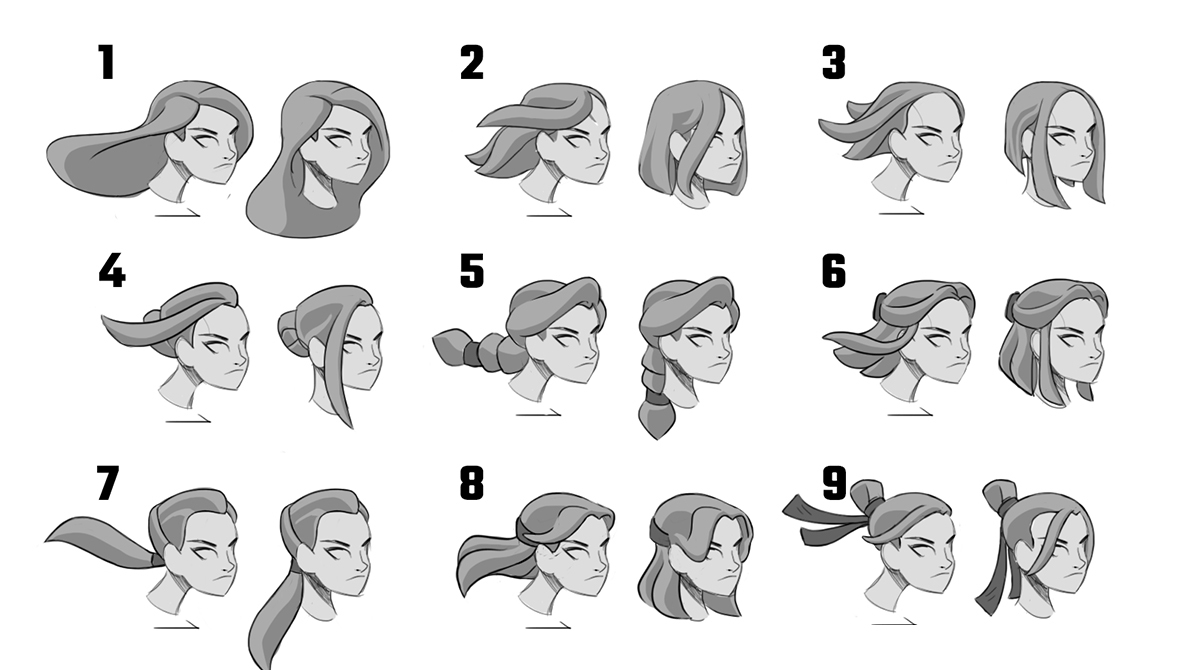 JAMIE: We had to experiment a bit on what would read well in game and what would not. Through many sketches and thumbnails, we started to get a scope of what our design team wanted and most importantly, didn’t want. Using that information, as well as the limitations of pixel art, we went through various iterations and styles to get across our ideas. Once we got a base figure type decided, we moved onto colour swatches. With many meetings and endless critiques of the Arbiters design, abilities, and function during development, we were eventually able to arrive at a design that satisfied the team. Naturally, with still being in development we are still making adjustments and improvements that we feel compliment the attitude and story.

What was the initial vision/design for the Arbiter?

JAMIE: As I mentioned earlier, there was little restriction on who or what the Arbiter was to be. Design requesting that the Arbiter be a human female literally left us with endless possibilities and potential. 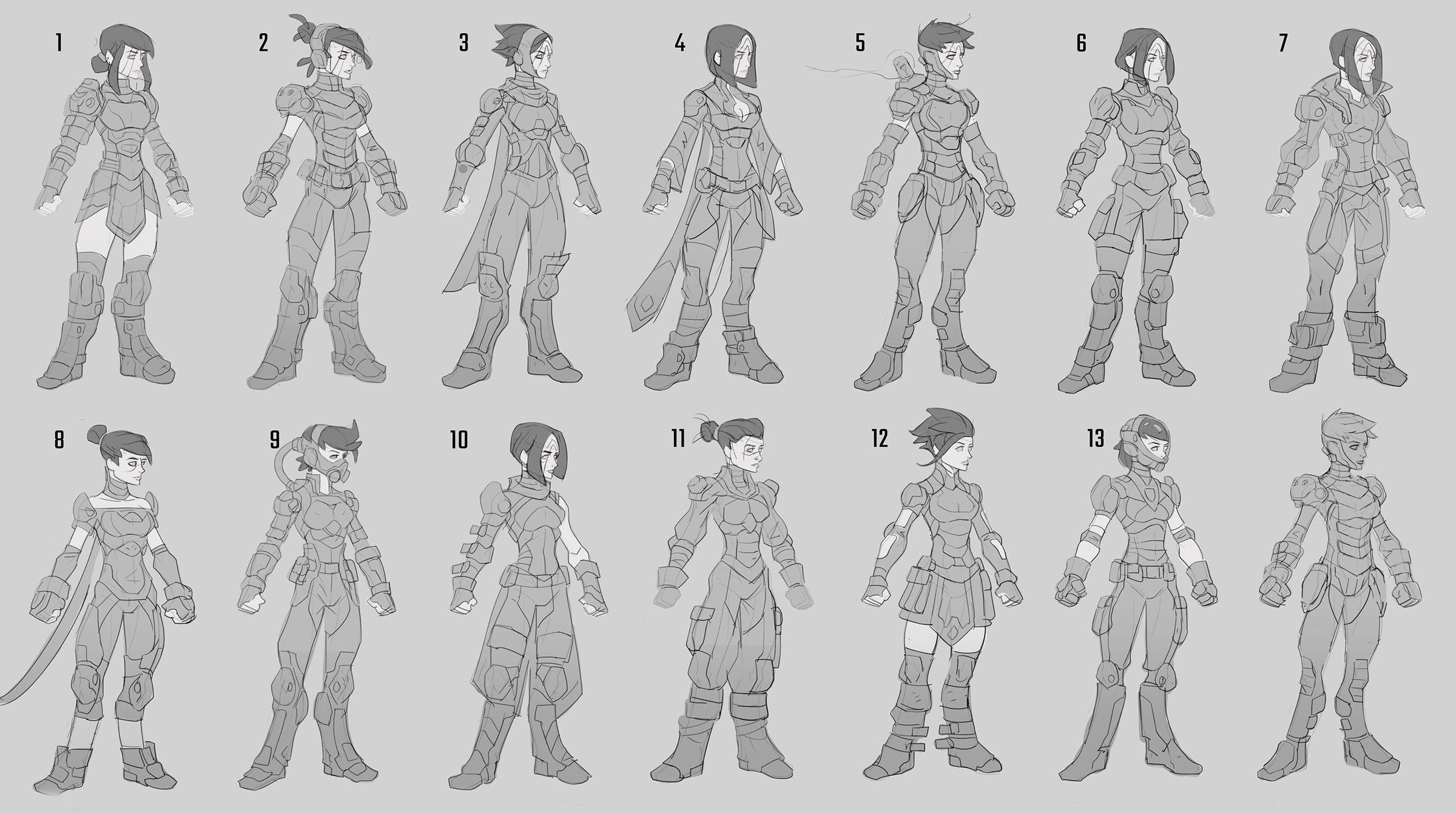 NAIHA: Initially we had something closer to the steampunk style of clothes and armour. Lots of gasmasks and cogs but this was hard to read on such a small scale, and things looked boring with a lot of brown/gold 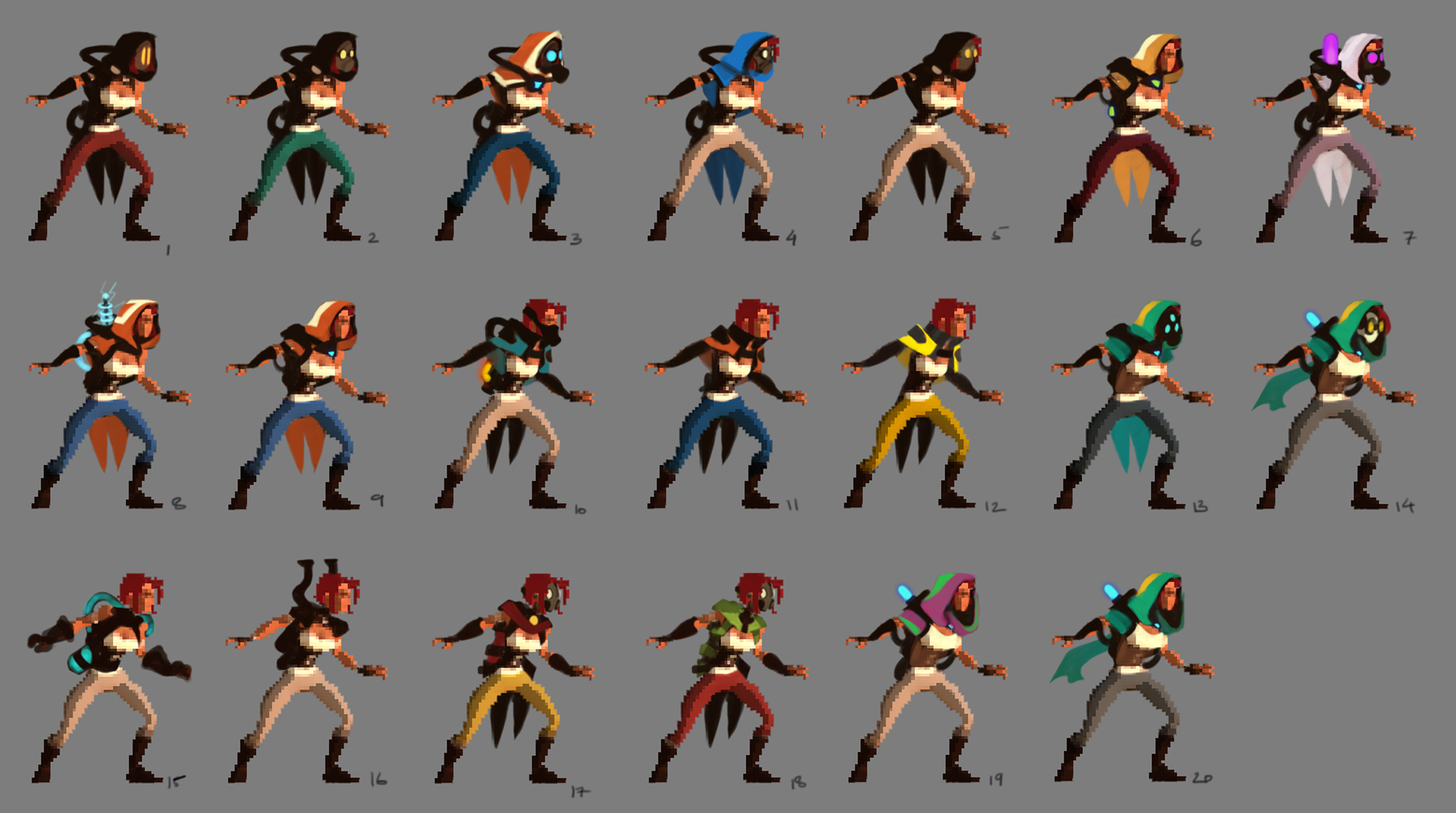 JAMIE: Nailing the pixelation of our lead was one factor that definitely swayed our options. Hair types, detail thickness and her movement style all played their part. We had a wide range of concepts and details, ultimately deciding that simplicity was key.

How has that vision/design changed throughout development?

NAIHA: We started with a heavy reliance on the steampunk side of things but eased up on that a little in her final design. A lot of things were altered so she could read better as she animates and interacts with the world. We removed a lot of heavy armour, simplified her design, and added some much-needed colour. 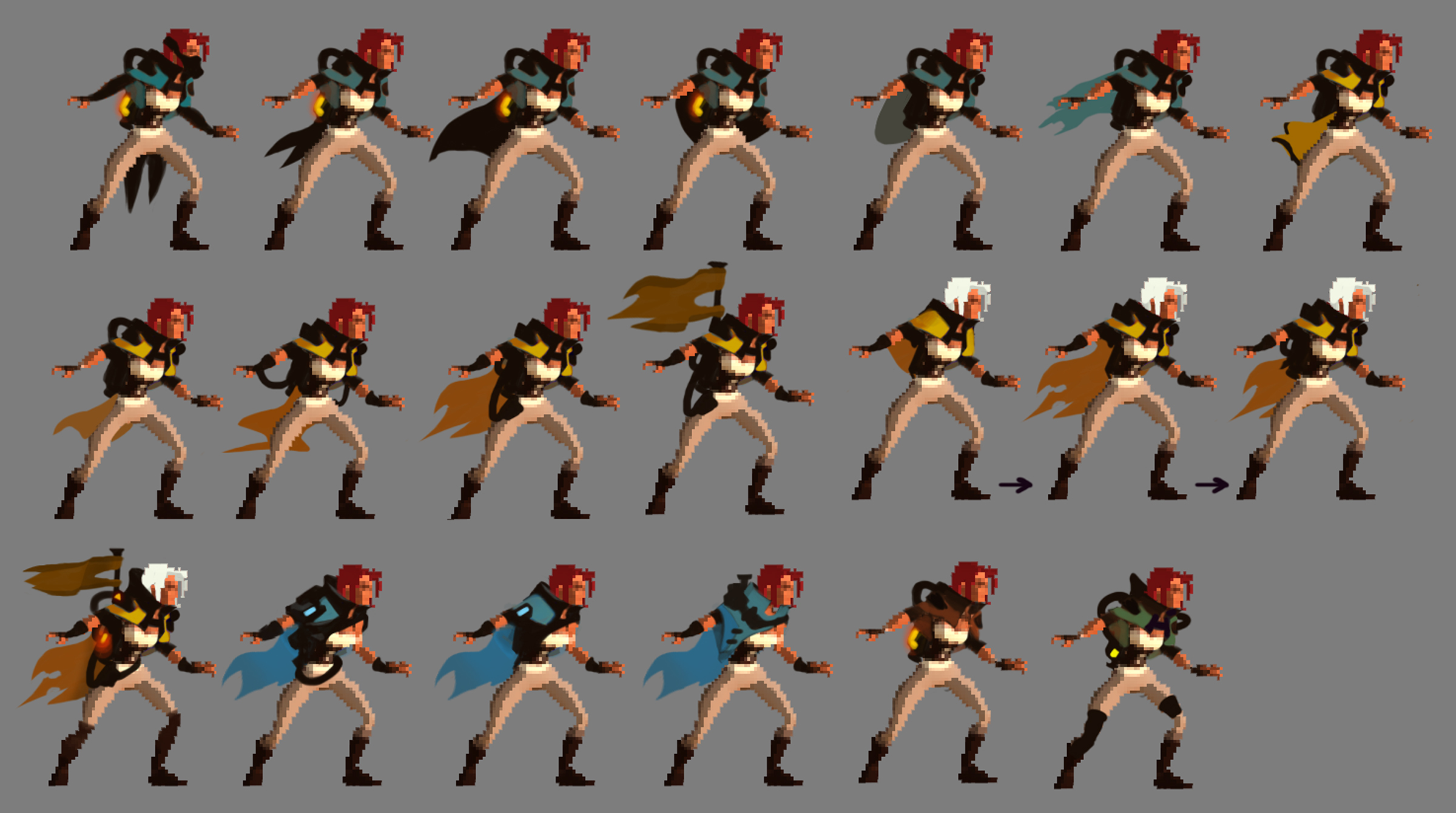 JAMIE: The development was very broad and creative. Not having a solid list and requirements at the start made this process exciting and interesting, to say the least. We have an amazing group of artists with different influences and ideas. New ideas are always welcome and have an opportunity. As long as you’re in development, constant change and growth is imminent. We stirred the pot many times, and continue to do so until we get to a final polished game. In the end, it’s all about quality.

Were there any inspirations that went into the design of The Arbiter?

NAIHA: For me, she’s a badass like Sarah Connor and Ripley. So her design, through her various iterations, was always inspired by those types of figures and a long list of games and movies like Overwatch, Hugo, Tim Burton’s 9 to name a few. 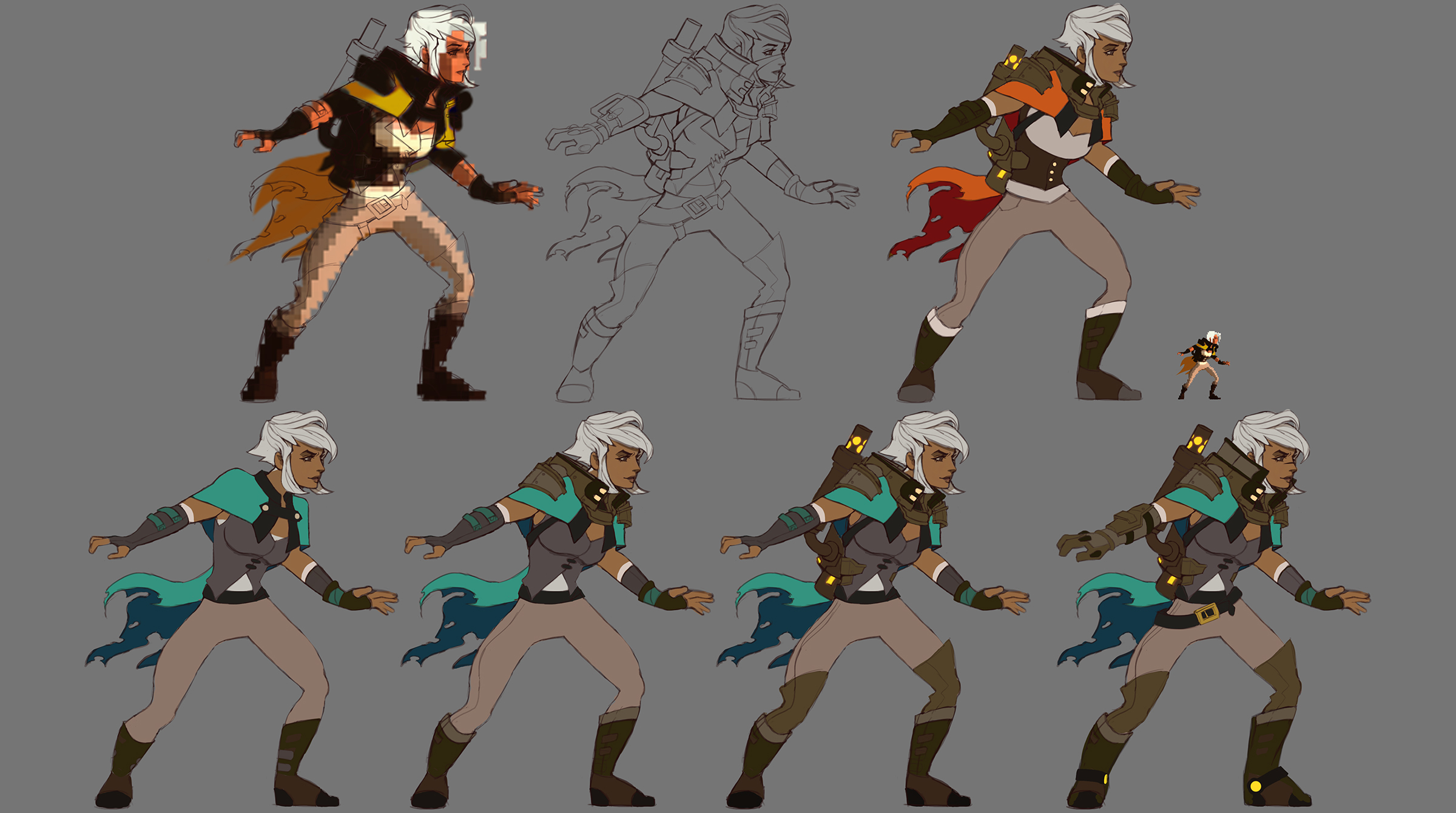 JAMIE: Inspiration was plentiful. It was easy for all of us to roll with the idea of a strong female character lead. There’s endless resources to pull from, whether it be fiction or real life. From Furiosa to the women in our industry as well as our everyday lives. Strong, skilled, fearless are some basic attributes add a dash of rock and roll and a pile of Nitro, and you have our Arbiter. 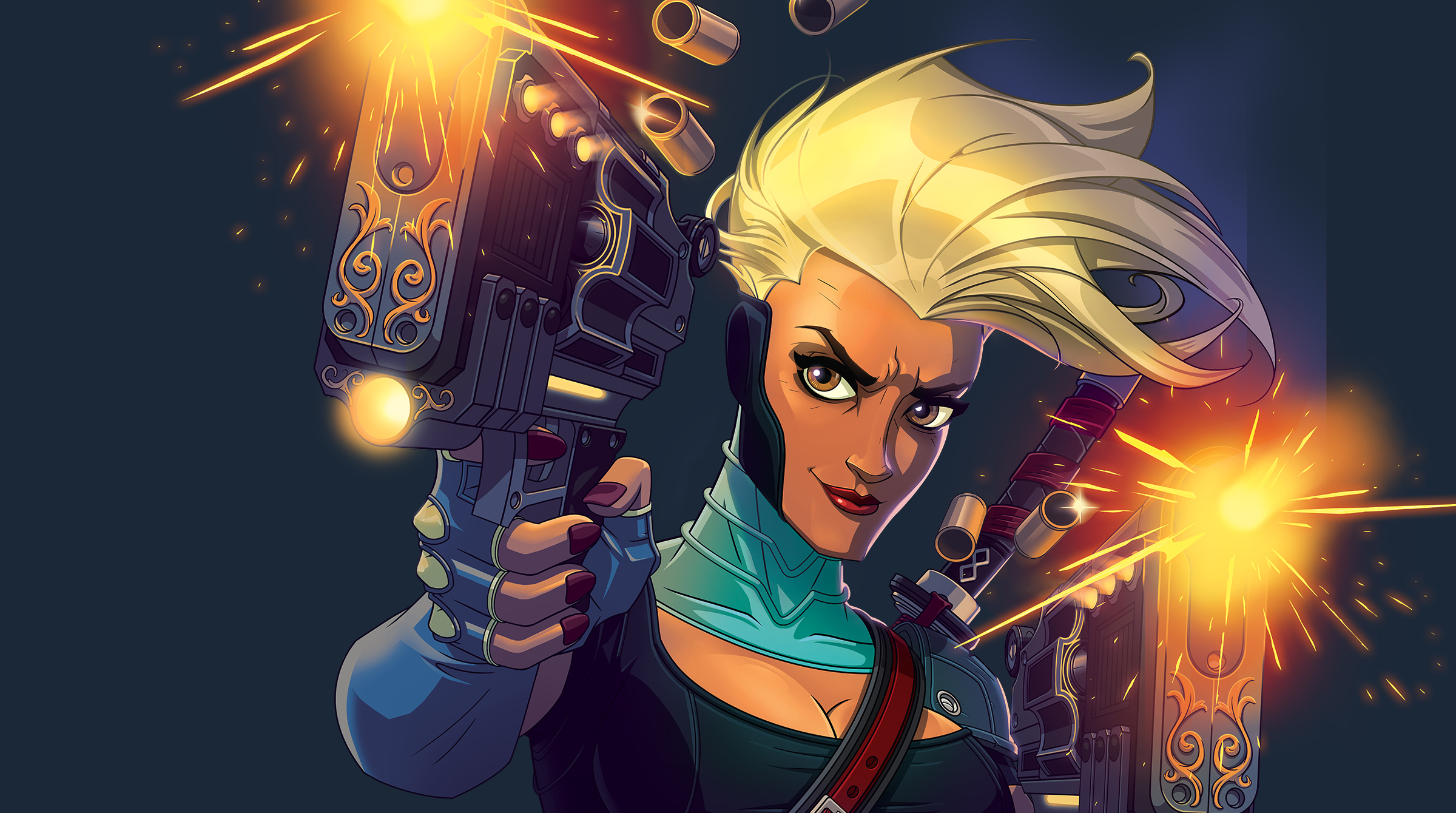